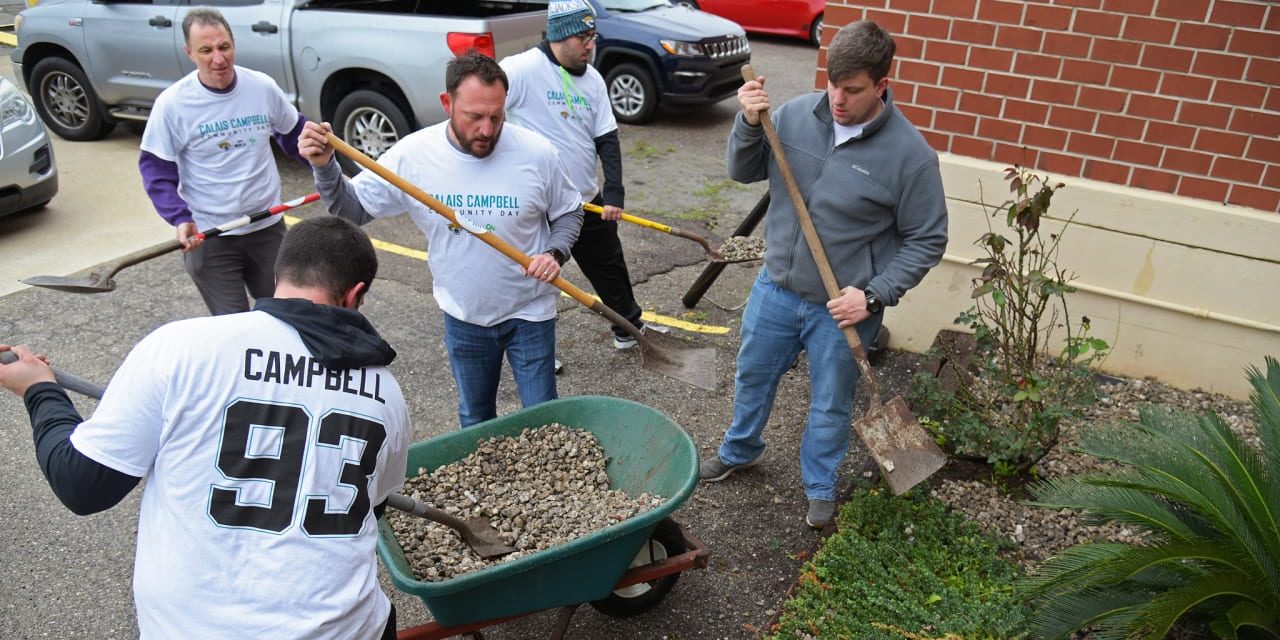 Earlier this month, Calais Campbell became the first Jaguars player to earn the NFL’s Walter Payton Man of the Year award for his community service efforts.

On Friday, the Jaguars honored Campbell with a day of service by more than 80 members of their staff at various organizations in Jacksonville, including Feeding Northeast Florida, the Clara White Mission, Ronald McDonald House of Jacksonville and Boys and Girls Clubs of Northeast Florida.

Campbell donated $20,000 apiece to four different organizations this past season – Feeding Northeast Florida, the Clara White Mission, the Wounded Warrior Project and The United Way of Northeast Florida. Before the Jaguars’ Sept. 29 road game against the Denver Broncos, he donated an additional $5,000 each to four other Denver-based charities.

“Today’s activities were intended as a tribute to Calais for his selection as the NFL’s Walter Payton Man of the Year,″ said Dan Edwards, Jaguars senior vice president of communications.

″Our staff wanted to congratulate him and show him our appreciation, and we felt that we should follow his example, so spending 93 minutes to help local organizations that he supports seemed to make sense. The idea was born out of our respect for him as a person and for what he does in this community.”

They helped decorate a dining area and provided pizza for families at the Ronald McDonald House. And they cleared weeds, added mulch, planted trees and washed produce at the Clara White Mission.

The NFL announced earlier this week that its Huddle for 100 community service initiative totaled 397,253,630 volunteer minutes from 1,020,846 volunteers donating their time.

Huddle for 100 launched at the 2019 NFL Draft to inspire 1 million people to give back 100 minutes of their time, with a goal of 100 million minutes donated to celebrate the NFL’s 100th season. In November, the NFL surpassed the 100-million-minute mark. By the culmination of the league’s 100th season at Super Bowl LIV in Miami, there were nearly 400 million minutes volunteered.

“We can’t thank the NFL family enough – our incredible fans, clubs and players – for the tremendous volunteer work that took place across the country and for helping us to shatter our goal of 100 million minutes, nearly quadrupling that number,” NFL Commissioner, Roger Goodell said in a statement. “Huddle for 100 brought our fans and communities together and the impact will be felt for the next 100 seasons of the NFL”

Jags’ Calais Campbell Launches Initiative To Donate Up To $20K Per Game Through 2019
September 5, 2019