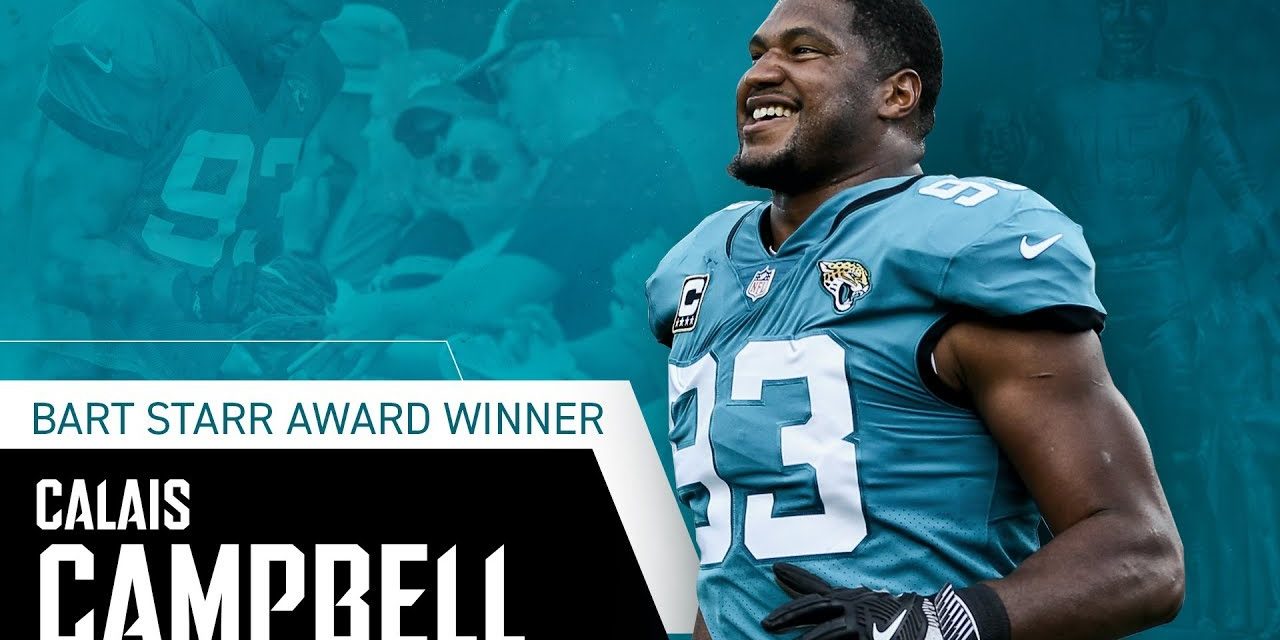 ATLANTA, Jan. 8, 2018—Results are in from the NFL players vote to identify the league player who best exemplifies outstanding character and leadership in the home, on the field and in the community. Calais Campbell of the Jacksonville Jaguars is the winner of the 2019 Athletes in Action/Bart Starr Award.

The award, bearing the name of NFL Hall of Famer Bart Starr, honors Starr’s lifelong commitment to serving as a positive role model to his family, teammates and community. Past winners of the award include Benjamin Watson, Peyton Manning, Aaron Rodgers and Drew Brees.

“Bart Starr left the NFL with an incredible legacy of kindness, humility, charity and compassion. Though many fans may not recognize his name today, most players know exactly who he is because of his impressive record on and off the field,” said Terry Bortz, Super Bowl Breakfast coordinator.

The original group of nominees for the 2019 Bart Starr Award included ten men who all boast impressive resumes both on and off the field. Campbell was selected by his peers in the NFL, making this the only award voted on by all the players other than the Pro Bowl.

“Each year we have watched the players identify those who are living up to the expectations set by this award’s namesake. Campbell is a top-notch player who is truly making a difference in the world, and we are thrilled to recognize his effort and good work,” said Bortz.

Campbell is in his 11th year in the NFL and serves as a captain for the Jaguars’ top-ranked defense. In addition to being named an Associated Press first-team All-Pro selection in 2017, winning the NFL 101 Awards AFC Defensive Player of the Year and being selected to three Pro Bowls, Calais lists his work in the community as his most cherished achievement during his tenure in the NFL.

Campbell runs the CRC Foundation, named after his late father, Charles Richard Campbell, which is committed to enhancing the community through the teaching of critical life skills to young people. Through sports, creative talents, vocational skills, financial skills, and quality health and nutrition, the CRC Foundation helps develop young people into empowered and self-aware leaders for the future.

Jaguars Honor Calais Campbell With A Day Of Service From Their Staff
February 21, 2020